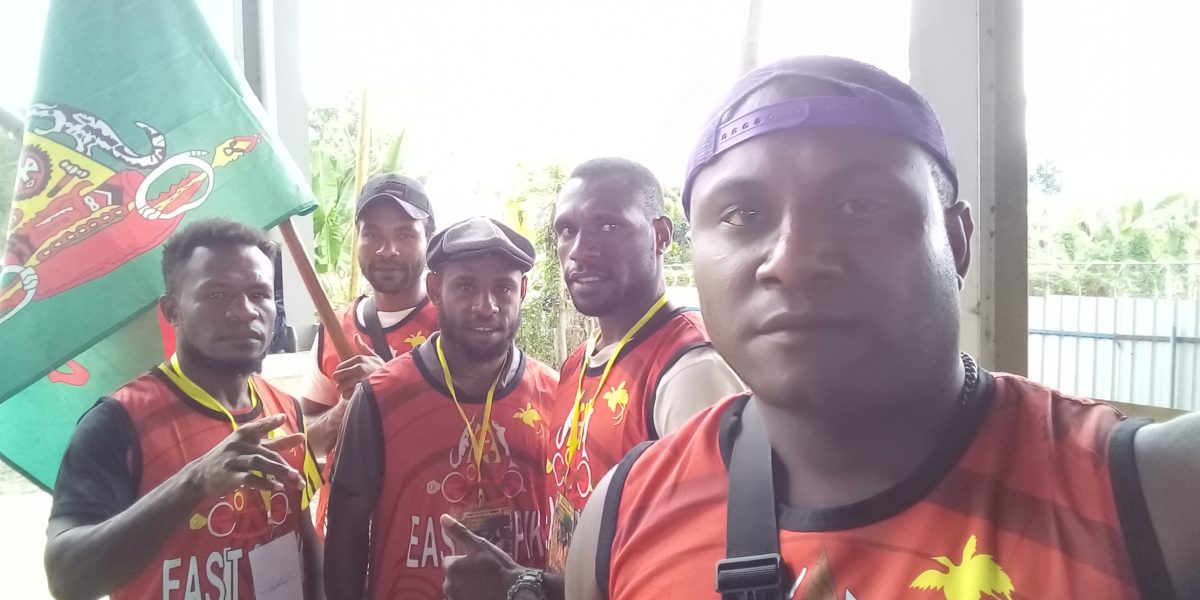 Lucas Gaurakai saw a previous post on our website here on our gifts to PNG of Boxing and Rugby League gear and reached out to me. I have sent three suitcases of used equipment already which you can see pictured below in the hands of his students. My aim is to raise some money over fight night and with the help of our suppliers get the possible deal for new equipment and I will do as I did before and deliver it in person to Wewak in the Eastern Sepik Province. You assistance would be much appreciated.

My name is Lucas Chalau Guarakai; I am 32 years old,married with a 1 year old son. I am from Wewak Town a small coastal town in the East Sepik Province of Papua New Guinea, the home of the first Prime Minister of Papua New guinea Sir Michael Somare. I grew up in a small Government Compound here in Wewak known as Kreer Compoud nicknamed ‘Carltex’ after a former Carltex Fuel Service station which was a major facelift and development in our community, Carltex fuel had since ceased operations but the name remains!! I never completed my Mechanical Engineering studies at college due to very high school fees in my country.

I now work as the Site supervisor here at “Carltex” which is now run by Puma Energy, the old service station being rundown was Replaced and rebuilt to modern systems to meet the ever-growing population of East Sepik Province.

I started Boxing at a very young age, I couldn’t remember, my dad was a former amateur boxer so it’s like I was born into the sport!! But actually I was never encouraged to take up the sport seriously because my dad believed there was no future of Boxing in PNG after MARTIN Benny and PNG getting Independence no one ever cared about venturing into Proffessional Boxing until lately!! Since I was smart in school my dad suggested I become an engineer of which I successfully did enter one of our premier Engineering Institute in the country unfortunately I did not go back to compete my final years of study!!

By the way during my schooling years I joined Karate in 1999 in Primary school but did not like it and continued training Boxing, I started fighting in Regional Championships and became 48kg champ,52kg champ and until 2004 I was introduced to Kickboxing, Stanley Nandex was a champion then and every boys dream was to become a World Champion Kickboxer.

I became National Amateur Champion 57kgs that same year!! I attended every Kickboxing championships until 2007 the year I went to college!! In college there was a boxing team so I represented the school, represented Las Morobe Province and fought against the BEST boxers in the country, some I beat some beat me on points or split decisions!!

After college I came back home and continued training Boxing and kickboxing and represented my home province again!! I must admit I played all weight categories in boxing and kickboxing in my lifetime!! I gave up training 3 years ago after our provincial government stopped supporting sports by sponsorship to attend championships around the country, all sporting codes in the province collapsed; sportsmen resorted to drugs and alcohol and there was a growing concerns of law and order problems arising every where in Wewak town, even kids and teenagers also became so undisciplined!! I also became a drinker and started eating junk food, I became obese!

After nearly 3 years a few of us local WEWAK town boxers got together and formed East Sepik Boxing Association, we decided to go back to individual compounds and settlement and create Boxing Clubs to keep the youths occupied also to keep them away from lawlessness; this is where “CARLTEX BOXING CLUB” is born on September 6th 2018!!

I started training Kids as young as 10 years old to teenagers in my backyard, that is where I startedlooking for someone to at least donate some training gear to us.

We now train Boxing and Kickboxing; lately in June 2019 My team was invited to attend a tournament in Goroka, I went with 3 boys, we returned home with 1 gold and I got silver at 91kgs!!

I made a promise to myself to get back in shape as well as guiding future citizens to positive living and produce champions among them!

Joe Thanks very much we appreciate the two suitcases you and your friends sent  to us,it means a lot to us because BOXING equipment here are very expensive!!

Attached are pictures of during and after training today with the equipment you sent us!!